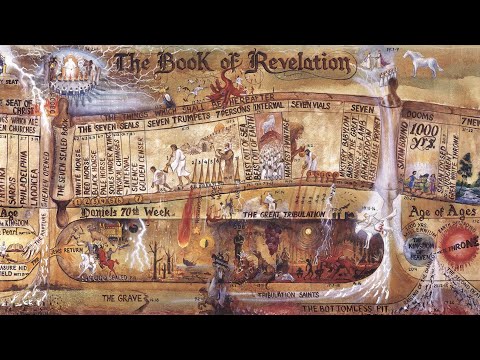 This is one of them, so the mystery behind the white horse is pending, till we get to that chapter. Now the beasts that kept talking to him are those four-faced beings, hope we know? What he also called the living creatures, they were revealing to him things that will happen on the Earth. Things that will unfold to men that are alienated from the Book, Men who do not satisfy the demands of the BOOK, so it’s not for those in Christ. The battle strategies or formations are not of earth but towards men on the Earth. It’s of a spiritual origin, now the second seal was broken, now these events are not taking place in no particular order, no! They can even take place at the same time or concurrently.

Now another scene rolled in and he saw a red horse, a horse soaked in blood, now the marching order of this battle formation is DEATH, To kill and to take peace from the Earth, now you see, the origin is not earthly, but it’s unto the Earth. Now let me reveal the literal happening of this horse, this formation is designed for death especially via rape and Holocaust and this happens on a widespread basis, if you make a search on great murders and great holocausts in the Earth, you’ll realise this, it is the working of the red horse, it is designed to take peace from the Earth and cause wars. Nuclear wars especially World war, Nations rising against nations, these things happen not from an Earthly origin, no! It is a formation of death and it happens because of the sin of men, part of a judgmental approach because men do not align with God, so any time you hear of wars and rumor of wars, it’s the working of the red horse when you hear of terrorism as well as the jihadists, hope we get that? So there’s a source that’s not earthly, now these are things that already unfold here.

I’m showing us the spiritual source and the literal unfolding so that we shall be wise, now another scene opened up and he saw a black horse. Remember that colour doesn’t necessarily depict evil, not in all cases, okay? Now the one who sat on this horse was given a MARCHING order and it had to do with the financial crisis. Now, what John meant by pair of balances means prices, demand, and supply It’s a business language, so what it means is a great economic meltdown. You suddenly realize that money loses value. The economy of a nation goes down so bad, this happening is not of earthly origin. How do I know?  You see great economists gather around to solve the nemesis, but nothing is solved, until these as on passes I fit was of earthly origin then earthly parameters would have solved it, right? I mean, we have great economists in this world, haha, so if the season doesn’t pass, nothing man can do He will only provide precautions, nothing more! The problem will still be there. Now, this is the formation of the black horse, it is designed to hit the market and cause Imbalances, and extreme bankruptcy and great poverty, we see it displayed already.

These happen to earth that doesn’t align to God’s Book and now you see that God is God over the Earth you don’t see it visibly, but you can see the manifestation, haha It’s something that MUST happen, you don’t pray away such, we need to understand something. See, when a seal is broken in Heaven, it means there’ll be a manifestation of what that seal locked up right here on the Earth, it is not in hands of man to reverse it. This is God acting as JUDGE, you don’t pray it away, no! But you can do something. No matter how we’ve prayed against Corona, it’s still here, I will soon enter that matter, Now when God told Moses about the angel of death which He was going to release in all Egypt, He didn’t tell Moses to intercede and stop it, no!

Moses even knew this was God acting as judge and LANDLORD of the Earth but He told Moses something. He said the Israelites should place a mark of identification on their door lintels so that when that angel passes by, he won’t come near them. So all of these things will happen right before our eyes as it’s already happening now but we won’t be partakers of it because we fall in His GOOD BOOK. That’s how you know that a judgment measure is from God, the innocents are spared!!! The innocents according to His book, so He has His books and strategy for marking the innocents, not our definition of innocent. So it’s not something you can pray away. Abraham tried it, it was even possible, but he never succeeded because when God comes for judgment, He comes when the sin is FULL. So no excuses. So these things you see happening, it’s not a demon, or Satan, no! It’s the Landlord Himself, the great Judge, Satan is a tool here, he’s nothing.