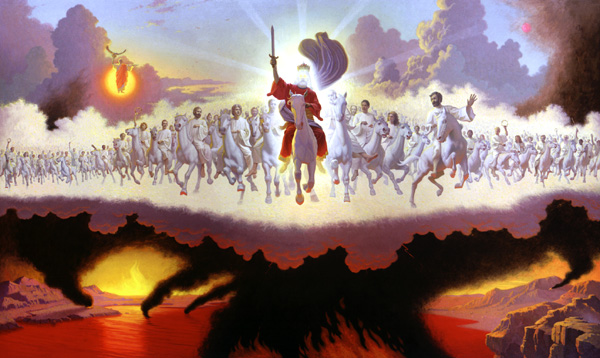 This is the continuation of  Mystery Revelation Chapter 7 ( part 1 )

It’s EXACTLY like the case of the Israelites and the angel of death situation which proves that God doesn’t judge those in His Good books, His wrath they do not partake in those who serve Him and walk after He is SPARED, they’re sealed to be KEPT as remnants. Forehead means OWNERSHIP, now from verses 4 to 8 doesn’t concern us, no! This one is the data of men sealed in Israel, remember that Israel is part of the four corners of the earth, I believe the Eastern coast, so John was only giving details for Israel. This was a global circumstance, how do I know it’s global? Because it first told us that the angels were placed in the four corners of the Earth, not the four corners of Israel, so it’s a global reality, not a Jewish one. Then another scene rolled in, he saw multitudes of men from all kindreds of the Earth, of all tongues and races dressed in white robes. Now, this is a vision, Remember! And white in this context signifies Righteousness, those who are right with God.

Now let me make this straight enough so we can perfectly understand this, this vision was talking about the great tribulations which we are already in, the Advent of the great tribulations comes with diverse sicknesses and diseases, persecution on believers will rise, the systems of darkness will rise and many things that will threaten the Love of God in our hearts will surface, So those who are God’s will partake in this.

Now those angels placed on the four corners of the Earth are the agents of these tribulations and hard times. Now they were given the order to HURT the Earth. It’s right there before you but they were told that before they hurt the earth, they have to seal those who are God’s own, this order was coming from the Throne, now the word ANGEL means messenger, now all spirits are messengers, as long as they’re created spirits proceeding from the Creator,  Spirit even Satan is a messenger this is why you can see ANGEL OF DEATH, the word ANGEL means messenger, so if your definition of an angel is divine spirits, you’ll deceive yourself. Angel literally means messenger, now the question is the messenger of what? Under what? Light or darkness? The angel of death that God released on Egypt, he was not a Divine spirit, no! But he’s called an angel of death.

Now the Lord rules over all spirits whether they align to His Government or not He’s KING, the ONLY kin, Satan and his Cohordes are rebels but there’s ONE KING, so God can issue an order and even darkness will perform His biddings if anyone of you has watched how to train your dragon. There were two alpha dragons that could control other dragons, and those dragons will do their bidding, it’s the EXACT way God is towards all spirits, so the angels positioned at the four corners of the Earth to HURT it, mustn’t necessarily be good angel, I hope we getting the picture? And we see their work already happening here, John was revealing the Spiritual catalyst to what is already happening right now, the economic issues, the great darkness and hunger on the Earth and more that will come. It is caused by these angels placed and we believers will be here and experience everything, but shall be sealed! We will see everything unfold, we’re not levitating ANYTHING, so John was seeing the tribulations hour And it will last for a season which wasn’t revealed.

Now, verses 9 to 17 are the record of the END of tribulations, yes! After tribulation! Those whose faith didn’t get watered or defeated by persecutions and threats those who didn’t lose hope in God even amidst the sufferings! So we see that the happenings may be the handiwork of darkness, but the source is the THRONE, it even carries the SEAL of the most high, it’s right there for us to see. Look at verse 14, one of the elders asked him a question. “Who are these ones dressed in white robes?” John didn’t know, haha, now the elder told him, “These are they which came out of GREAT TRIBULATION” do you see it now? So they partook in it but survived it because they kept their Faith, It was this place Jesus was talking about when he said, “Shall he till find Faith?” So it was talking about believers, if you read verse 14, the rest of the verses, the elder made it known to John how that the believers will be spared and kept by the Lamb. So this entire scripture is just revealing the GREAT TRIBULATION.

Many rose and said believers will not partake in it, but this is proof that we shall be here, and the rapture or levitation theory is HUMAN, not Divine, it’s a human escapism theory. The LAMB Himself will keep us these days, many great and awful things will happen, even worse, yes! And we’ll all be here by the four angels, this will be a global thing. No place will be spared! The coronavirus is an example, the trees signify the atmosphere so the virus may be a man-made thing, but man is a tool. The order came from the THRONE, you may see darkness ravaging our lands, but darkness is operating by order what’s God trying to achieve with all these? We shall know as we go on with these series, I’ve ended my lecture Tomorrow we will do chapter 8 Just makes sure you’re not losing anywhere, I’m done! Go through today’s teaching, follow-through, connect the dots and don’t be lost anywhere.

We don’t do dominating teaching here, no way! You’re to see for yourself too before you accept, we’re not raising clowns, cause we have a generation of clowns “My papa says! My papa says” generation which is why many dark beliefs have eaten deep into the Body of Christ today. So you’ve seen chapter 7 revealing the source of the great tribulations, the manifestation which we already see, and the tools used or employed to make it happen, the source is the THRONE. Carrying the order and the Seal of the Living God Himself, as we go on, we shall all see TOGETHER what God is wanting to achieve. See, knowing this will make you discern the seasons, Kai! It’s very important, you won’t depend on the lies of media, it’s not everybody the media can brainwash, haha, not me! I know how I get my news and where I get it,  from a very reliable source. Some new Creation forgot that know NOTHING about God have risen and said none of this happenings is caused by God, in order to keep the peace, I just laugh and walk away I don’t want trouble but now we see in this scripture, the spiritual circumstance behind what is already unfolding on the Earth realm, it’s very clear in this scripture.

So whether you accept it or not, it DOESN’T CHANGE ANYTHING, It is how it is! You should be on the part of enlightened folks than be on the part of self-deceived believers and I believe your mentality about God has changed, that God that is your Father is also the JUDGE, that you don’t experience His JUDGE part doesn’t mean it doesn’t exist. This is what new Creation stupids do that gets me vexed. I’m a new creation too, In fact, I engage in real life, all they do is talk, one came to me yesterday and was like, “sir I’m sick” and the last post he made he was shouting that he’s above sickness I was shocked, like really? ‍ I told him, “but sir, you said you’re above sickness” He didn’t reply till now, maybe he didn’t know I saw his post. My eyes are everywhere, confession is a by-product, not a starting reality. It’s for fetching but these new creation decoys don’t understand, they think it’s by confessing before they embody, rubbish! If you have not yet embodied by BEHOLDING, you have no rights to confess anything because nothing will happen, a confession is a tool for fetching, that will be all for today, folks We’ll meet tomorrow On chapter 8,